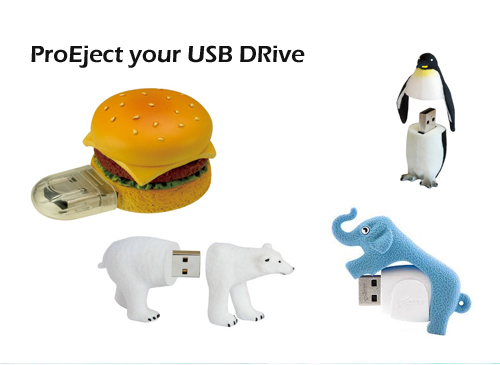 Although I am no longer an avid supporter of portable USB-based storage, I still believe that most of you still uses it. It is, therefore, necessary to, at least, show you how to properly use it.

How do you use it?

of course to store files! I know that, but my point is, do you know the proper way of mounting and dismounting it in your PCs? Did you know that we should eject it first from the task bar before physically removing it, or you risk of destroying its contents? I am sure most of you knew this but most oftentimes, we forget to do just that.

What can we do about it?

Homo Sapiens like us are really bound to forget, but with the aid of code concoctions like ProEject, USB data will be safe and comfy while in use.

Here’s what its creators are saying about it:

ProEject is an easy to use application which allows you to safely dismount a removable drive by closing running applications and open windows, as well as clearing the registry and folders of any trace that the USB drive might have left behind. By placing ProEject on the same drive you want to eject and running, will automatically eject the drive with little fuss. It’s that simple.

ProEject will remove traces of programs in the MRU (most recently used) sections of the Windows Registry, as well as entries created in the “Run on Startup” key. As an addition ProEject also checks for shortcuts created in the SendTo, Recent, Quick Launch, Pinned (Windows 7 only!) and the Windows Firewall.

here’s how Lifehacker describes this product:

Windows: ProEject is a freeware utility that safely dismounts any removable drive by closing running applications and windows that are based on the drive. It can do this while automatically cleaning the registry and folders of the host computer from any trace the USB drive may have left behind.

Advanced features include command line support and a long list of applications that can be integrated in the dismount process if present in the same directory as ProEject. The most useful of these is TrueCrypt.exe; if the USB drive contains a mounted TrueCrypt drive ProEject automatically detects this and dismounts accordingly.

With so many innovations in the Windows series of operating systems it is a bit strange that USB connections are natively handled the same way today as they were in Win98SE. ProEject is a useful tiny (703KB) utility that you should consider adding to your removable drives.

What Are you waiting for? Grab it now and start protecting your USB drives and its precious contents. Its here