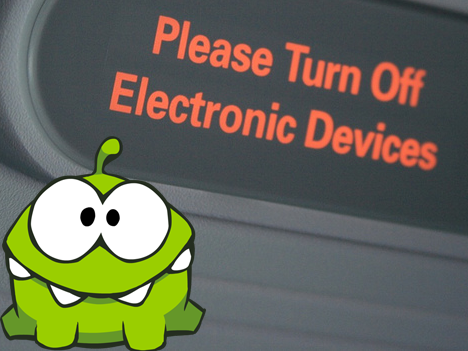 I am sure that most of us are aware that we are not allowed to use any portable electronic devices during an aircraft’s take off and landing. I also know how annoying it is to stop my “Cut the Rope” session just as I am about to go to the next level because the plane is taking off or touching down.That’s cruel right? It is not humane to interrupt anybody killing those green pigs who stole those adorable Angry Bird’s eggs.

I am glad that the FCC has finally heeded our most pressing concern- to keep killing those nasty Zombies on our mobile devices during take off and landing. It was reported that the FCC recently urged the FAA to reconsider this issue.

Julius Genachowski, Chairman of the FCC, sent a letter to FAA acting director Michael Huerta on Thursday exhorting the benefits of tablets and computers, which he says “empower people to stay informed and connected with friends and family.” Genachowski also sprinkled in some economic arguments for good measure, saying that the devices enable “both large and small businesses to be more productive and efficient, helping drive economic growth and boost US competitiveness.”

In response to growing public pressure, the FAA formed a committee in August to study its current policies on electronic devices, but so far no recommendations have been made. Hopefully, this nudge from the FCC can provide a little extra motivation to move things along. In a way that doesn’t end in planes dropping out of the sky, of course.

Be wary, my little spider foe, we will soon be able to continue “Cutting that Rope” during take off and landing without ending on the FAA’s no-fly list.

For more information check this report from The Hill

Filed Under: News and Commentaries
← The Anatomy and Physiology of an HL7 Message
Bio-Seal Lung Plug System Introduced To Reduce The Risk Of Pneumothorax During Lung Biopsies →