Did You Know That Breast Cancer Cells Can Also Give In To “Peer Pressure”? 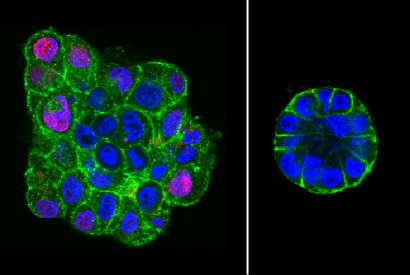 There’s been a lot of discoveries introduced lately about cancer, its cause and potential cure. It is, however, strange to know that its proliferation can be influenced by its surrounding environment. Sounds like “peer pressure” right?

Professor Mina Bissell of University of California Berkeley and her team discovered that the conversion of a normal cell into a cancer cell depends on the nature of its surroundings. Principal investigator, Daniel Fletcher (Professor of Bio-Engineering at UC Berkeley) stated that;

“We are showing that tissue organization is sensitive to mechanical inputs from the environment at the beginning stages of growth and development. An early signal, in the form of compression, appears to get these malignant cells back on the right track.”

They found out that exerting mechanical pressure to the breast cancer cells forces them to return to its normal state (Healthy Breast Tissue).The results of their research were presented to the annual meeting of the American Society for Cell Biology in San Francisco.

Cancer-Fighting Compression Bra is not Recommended

The researchers, however, don’t suggest creating a cancer fighting compression bra.  “Compression, in and of itself, is not likely to be a therapy,” said Fletcher. “But this does give us new clues to track down the molecules and structures that could eventually be targeted for therapies.”

To revert breast cancer cells, give them the squeeze

Lung biopsies naturally puncture the organ, sometime leading to a pneumothorax (collapsed lung) – a potentially life-threatening complication. The FDA has just cleared the Bio-Seal Lung Biopsy Tract Plug System from Angiotech, which allows physicians to apply a special hydrogel plug to the needle entrance site and block air from exiting through the hole. The hydrogel expands after coming in contact with body liquids after imlantation. … END_OF_DOCUMENT_TOKEN_TO_BE_REPLACED

I am sure that most of us are aware that we are not allowed to use any portable electronic devices during an aircraft’s take off and landing. I also know how annoying it is to stop my “Cut the Rope” session just as I am about to go to the next level because the plane… END_OF_DOCUMENT_TOKEN_TO_BE_REPLACED

If you are wondering about the relationship of this post to nursing informatics, you are right. This article has nothing to do with our profession. I just want to share with you this awesome table design which I believe any geek will appreciate.

If you are like me who wants to know more about the medication I’m taking, you will be finding yourself on Google searching for information about those medications. Apparently, Google did notice that. They decided to make their results smarter by adding a more detailed information about these drugs. They said that, this data comes… END_OF_DOCUMENT_TOKEN_TO_BE_REPLACED

So, Windows 8 has been out for a bit over a month and there is already talks on the Internet about the next version of Windows codenamed Blue that supposedly will come out in less than a year’s time.  Tom Warren over at The Verge reports that Microsoft is planning to standardize Windows and Windows Phone updates in an effort to release updates more frequently to consumers.According to Tom’s sources – unnamed but apparently close to the company – Microsoft may be preparing a Windows Blue release for mid-2013 which will be priced at a low cost or free. The basic idea behind the plan is to get Windows users to upgrade to the Windows Blue platform which acts as a base platform for all future versions of Windows.Windows Blue will ship with its own updated SDK and it will be at that time that Microsoft will stop accepting new apps designed with Windows 8′s SDK in Windows Store. While apps are said to work under Windows 8 and Windows Blue, only apps created with Windows Blue’s SDK will be accepted in the store from that time onwards.Tom reports that customers need a genuine version of Windows to upgrade to Windows Blue and that protection will be integrated into the operating system that will block built-in apps and Windows Store from functioning if a pirated copy is detected.Microsoft will push towards a faster update cycle, possible at an annual rate, to increase the system’s competitiveness against Apple and Google operating systems that are upgraded more frequently.What does it mean for customers and developers? … END_OF_DOCUMENT_TOKEN_TO_BE_REPLACED

Infographic of the Day- The Weight of the Union

As the old cliche goes, “a picture paints a thousand words” . The following “infographic” material “paints” a thousand words about our current obesity epidemic. It is causing havoc over our physical health, wreaking our financial state and damaging the fiscal state of the union.